Karma means material action, that which is instigated by egoistic desire. It sets into motion the law of cause and effect. The action produces a result that binds itself to the doer until the cause is compensated by the appropriate effect, whether forthcoming immediately or carried over from one life to another.

The habits you cultivated in past lives have substantially created your physical, mental, and emotional makeup in this life. You have forgotten those habits, but they have not forgotten you. Out of the crowded centuries of your experiences, your karma follows you. And whenever you are reborn, that karma, consisting of all your past thoughts and actions and habits, creates the kind of physical form you will have—not only your appearance, but your personality traits. It is these individually created past-life patterns that make one person different from another, and account for the great variety of human faces and characteristics. The very fact that you are a woman or a man was determined by your self-chosen tendencies in previous lives. (dr)

Karma is the law of action or cosmic justice, based upon cause and effect. Your every act, good or bad, has a specific effect on your life. The effects of actions in this life remain lodged in the subconsciousness; those brought over from past existences are hidden in the superconsciousness, ready like seeds to germinate under the influence of a suitable environment. Karma decrees that as one sows, so must he inevitably reap. (os)

Before you act, you have freedom, but after you act, the effect of that action will follow you whether you want it to or not. That is the law of karma.

You alone are responsible for yourself. No one else may answer for your deeds when the final reckoning comes. You work in the world - in the sphere where your karma, your own past activity, has placed you - can be performed only by one person: yourself.

Your failure or sickness or other troubles started with unwise actions in past lives, and the effects of those causes have been brewing within, waiting for the right time to bubble over.

Disease, health; failure, success; inequalities, equality; early death, long life—all these are outgrowths of the seeds of actions we have sown in the past. They cause us to come into this world with varying degrees of goodness or evil within us. So even though God made us in His image, no two people are alike; each has used his God-given free choice to make something different of himself. This is why some people suffer for the slightest reason. Others become angry at the least provocation. And there are those who eat endlessly without any self-control. Did God make them that way? No.

Each person has made himself the way he is. There would be no justice in this world if God had arbitrarily made us the way we are. I sometimes think God must be watching in amazement this big zoo of human beings here, blaming Him because they have a headache or a stomachache, or are always getting into trouble. Don't blame God or anyone else if you are suffering from disease, financial problems, emotional upsets. You created the cause of the problem in the past and must make a greater determination to uproot it now. (dr)

A man takes birth in a certain family, a particular social and national environment, owing to specific causes—his own past actions. Therefore man is the architect of his own destiny. One can almost predict what he will be in his next life by analyzing his dominant interests and habits in this one. (me)

Since all effects or seeds of our past actions, our karma, can be destroyed by roasting them in the fire of meditation, concentration, the light of superconsciousness, and right actions, there is no such thing as fate. You make your own destiny. God has given you independence, and you are free to shut out His power or let it in. (os)

When a true yogi performs an action, karmically it is like writing on water. No mark remains.

There may be a million years of actions of past lives pursuing you. That is why an ordinary individual finds himself so helpless to destroy the binding effects of his karma. He feels hopelessly bound by those invisible chains—influences resulting from all the actions he chose to perform in past lives, through free will or through prevailing influences. (jt)

Accumulated bad mass karma precipitates wars, diseases, poverty, devastating earthquakes, and other such calamities. During times of prevalent negative vibratory influences, the individual must thus contend not only with his personal karma, but also with the mass karma affecting the planet on which he lives. (bg)

God is not your judge; you are your own judge. If you act wrongly, you are going to punish yourself. If you act rightly, you will free yourself. That is the justice of the law of karma. You are dictated to neither by God nor His angels, but by the law of action: What you sow, you reap. (jt)

What you sow,
you reap

Anything you hate, you attract to yourself that you may learn to overcome that prejudice. That is the law.

Refuse to be bound by karma; it is an old superstition of the ignorant to believe you cannot change your destiny. (jt)

Deny karma. Too many people misinterpret the meaning of karma, adopting a fatalistic attitude. You do not have to accept karma. (os)

Trials do not come to destroy you, but to help you appreciate God better. God does not send those trials. They are of your own making—the effects of conscious or unconscious actions in the past, somewhere, sometime. You must blame yourself for these; but do not, as a result, allow yourself to develop an inferiority complex. All you have to do to overcome your trials is to resurrect your consciousness from the environment of spiritual ignorance. (jt)

When you realize yourself as a child of God, what karma have you? God has no karma. And you have none, when you know you are His child. Every day you should affirm, "I am not a mortal being; I am not the body. I am a child of God."

Persons who pass their lifetime satisfying the body and gratifying the ego, unaware of the Divine Image in themselves, amass earthly karma or sins. When they die with those unresolved karmic consequences and with unfulfilled earthly desires, they must reincarnate again and again to resolve all mortal entanglements. (sc) 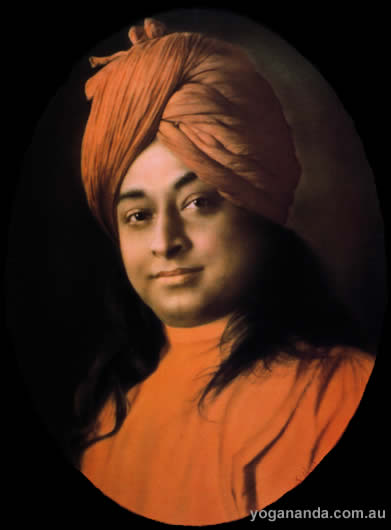