A great crisis is going to come,
a crisis such as never before has hit this country (America).

Most are now living in blissful oblivion,
unaware of the impending emergency.

When the selfishly rich hold on to their wealth and don't want to give the laborer his due, disorder follows.
This is what has happened.

America will experience widespread misery, suffering, and changes. You are used to the better things of life, and when you are obliged to live simply, you won't like it. It is not easy to be poor after being rich. You have no idea how this change is going to affect you through the years. Never before in the history of this land has there been so deep a contrast in living standards as will visit this country—the contrast between riches and poverty.

How can you meet the world crisis that is coming? The best way is to adopt plain living and high thinking. Unless you make drastic changes in your living habits immediately, you will be rudely surprised; conditions will change in a way you cannot imagine now.

Man should concentrate on brotherhood. Each one should live for all, loving everyone else as his own.

Regardless of where your home and work are, cut out luxuries, buy less expensive clothes, supply yourself with things you really need, grow your own food, and put money aside regularly for greater security.

Pay cash for everything you buy, and if you don't have the cash, don't buy. Don't borrow; you will have a hard time paying on the principal because of the high interest. You must learn to save in every way possible.

The Environmental and Economical Crisis

God has given man the power of destruction as well as the power of creation. We have made the world beautiful, and we have the power to destroy it. When we desecrate the world, the environment undergoes a violent change, which is called partial dissolution. Such upheavals have occurred many times — one example is Noah's flood. These partial dissolutions are due to the wrong actions and ignorant errors of mankind. Don't think the happenings of this world are going on automatically without God's knowledge. And don't think that man's actions have no effect on the operation of His cosmic laws. Everything that has happened throughout the ages is recorded in the ether. The vibrations of evil that mankind leaves in the ether upset the normal harmonious balance of the earth. (dr)

When the earth becomes very heavy with disease and evil, these etheric disturbances cause the world to give way to earthquakes, floods, and other natural disasters.

The good and bad karmic conditions created by man determine and influence the climate; they affect the wind and the ocean, even the very structure of the earth, sometimes causing earthquakes. All the hatred, the anger, the evil we send out into the world, and the agony and rebellion they cause — all these are disturbing the magnetic force of the earth, like static in the ether.

In the destruction caused by this war [WW II]* we are seeing a partial dissolution of the world — dissolution of lives, money, homes. In many ways it is worse than Noah's flood; it is a flood of fire and bloodshed. But one thing is encouraging: the good karma of mankind is greater than the evil karma. If this were not so, the earth would explode from the negative vibrations. Contrary to appearances, the earth is in an ascending cycle, and good will triumph. (dr)

* Paramahansa Yogananda deliverd this talk on 26 May 1940

The world is a sort of living being, with a predetermined age. We are the children of this great mother earth. ...The earth "dies" through partial dissolution, then reincarnates again to give human beings new life, new strength, a new habitat in which to work out their karma. Many times the earth has undergone partial dissolution and reincarnation. (dr)

The Life Cycles of the Earth

The life cycles of the earth. These cycles consist of 24,000 years, divided into four yugas or ages—12,000 years of ascending through these yugas to increasing enlightenment, and then 12,000 years of descending through the yugas to increasing ignorance and materialism. Each of these half-cycles is called a Daiva Yuga. The earth has already passed through many complete cycles since the dawn of creation. The four ages of each Daiva Yuga are Kali Yuga, the dark or materialistic age, Dwapara Yuga, the electrical or atomic age, Treta Yuga, the mental age; and Satya Yuga, the age of truth or enlightenment. 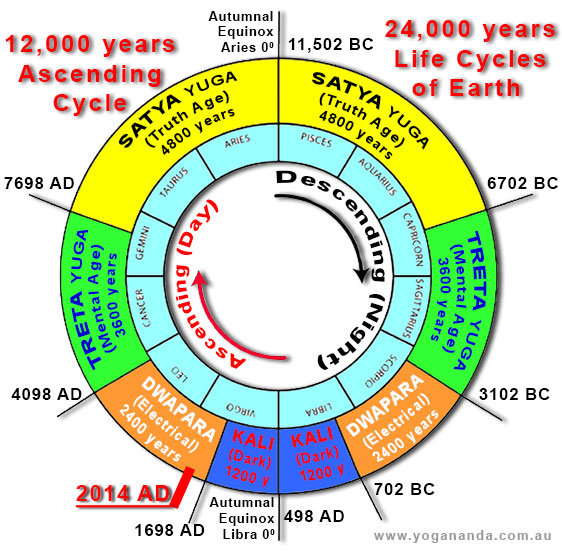 The earth has already passed through Kali Yuga, the materialistic age of 1,200 years' duration. According to the calculations of my guru, Swami Sri Yukteswar, we are about 314 [2014] years into Dwapara Yuga, the second age, which consists of 2,400 years. Now in its ascendancy, this is the electrical age, even though it may yet seem very materialistic. If you think about it, you will see how man has progressed from comprehending only gross matter to understanding and harnessing the energy in matter. In this age, man will make great headway in the electrical or electromagnetic field of science.

The trouble in this second age [the current Dwapara age] is that there is not enough security, because science plays the part of Dr. Jekyll and Mr. Hyde. Man uses science not only to create and do good, but to destroy as well. Therefore scientific development is not yet safe.

In the material age, the majority of mankind is materially minded. But you will also find those who are living ahead of their times, Christlike souls. In the mental and electrical ages, you will find predominant the mentalities characteristic of those yugas. At the same time, there are other mentalities — some that are more highly evolved, and others not yet as highly evolved. Thus in this electrical age you can find people who are still living in the stone age. There is always a balance: some who are living ahead and some who are living behind the age of civilization in which they are born.

Through repeated incarnations, those of lesser development will gradually advance until they express the mentality of the age in which they reincarnate, and eventually, the qualities characteristic of the higher ages yet to come. The cycles of this world are like a see-saw going up and down. But when we hasten our evolution through right living and a spiritual technique such as Kriya Yoga, we live ahead of our time and can find freedom in God within this or only a few lifetimes.

The cycle will be continuous, descending and reascending through all four ages again and again.

Intermittently, cataclysms will occur, in which the world will die and then begin anew its continuous cycle.

The earth was created to bring souls to their divine destiny; it is carrying a heavy burden. (dr)