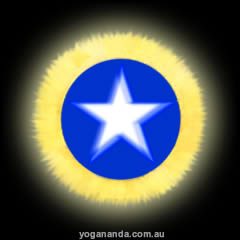 When the yogi concentrates long enough with half-open eyes at the point between the eyebrows, and when the gaze is without any restless motion, he will be able to see a steady light surrounded by other, but flickering, lights. He should not be diverted by this glimmering halo of the spiritual eye, but should steadfastly look at the center of the eye until he feels his mind completely absorbed within it. In time, he will see the perfect formation of the spiritual eye: a dark opal-blue globe within a quivering ring of flame. Gradually, by deep concentration, an extremely brilliant white star occasionally glimmers in the center of the blue. The star is the gateway through which the consciousness must pass to attain oneness with Spirit.

It requires time and calm practice to steady the light of the intuitive astral eye. It takes deeper and longer practice to see the star. It requires greater realization to hold the perception of the star. And it takes mastery in meditation to march the consciousness, valiantly triumphant, through the starry gate of light.

After the devotee is able at will to see his astral eye of light and intuition with either closed or open eyes, and to hold it steady indefinitely, he will eventually attain the power to look through it into Eternity; and through the starry gateway he will sail into Omnipresence. Progression through the spiritual eye, experienced by advancing yogis, unfolds first the wondrous perceptions of superconsciousness, the region of rays of light out of which all matter evolves. The creative cosmic rays hide like veils the presence of the immanent universal Christ or Krishna Consciousness, the Lord omnipresent in creation. By deeper concentration and meditation, the spiritual eye of intuition opens, and through the wisdom star the yogi becomes united to the Christ-Krishna Omnipresence; and thence, in deepest ecstasy, he reaches the Cosmic Consciousness of Spirit. [ "I (the universal Christ Consciousness in Jesus) am the way, the truth, and the life: no man cometh unto the Father (mergence in Spirit beyond creation), but by me (ascension through the Christ Consciousness omnipresent in creation)."—John 14:6.] (...)

Be not satisfied with anything less than Spirit and the bliss of Spirit. Pay no attention to variations of the inner light, but practice concentration on the light of the spiritual eye. The light of the eye must be used only to look for God, the One whose presence is hidden on the throne of light. (Chapter VI, God Talks With Arjuna: The Bhagavad Gita by Paramahansa Yogananda, p.612)

Long concentration on the liberating spiritual eye has enabled the yogi to destroy all delusions concerning matter and its gravitational weight; thenceforth he sees the universe as an essentially undifferentiated mass of light.
— Autobiography of a Yogi by Paramahansa Yogananda

The single eye in the forehead of man possesses spherical vision. In meditation that vision gradually expands for the yogi into an ineffable sphere of constantly changing luminosity, blissful and omnipresent.

After experiencing this vibratory vision of Aum as the Cosmic Light, the emancipated yogi goes beyond all delusive relativities of vibrations. He then feels and realizes the Transcendental Lord—He who exists behind the transitory dreams of cosmic matter and its myriad components of cells, molecules, atoms, electrons and protons, "lifetrons" (prana or energy), and "thoughtrons" (the ultimate basis of matter).

In the transcendental state God spins out His dreams of ideational (causal), astral, and physical universes. The physical cosmos, with its many "island universes" floating in the eternal void, is encircled by a nimbus of radiant energy that melts away into the larger astral world. The astral cosmos is a grander manifestation of creation than the physical, and runs through and beyond the latter. In the astral cosmos many luminous galaxies of various densities, with their astral solar and stellar systems, are roving in a vaster sphere of eternity.

The largest or causal cosmos contains countless causal galactic systems with their suns and planets, roaming all through the physical and astral cosmoses and far beyond their boundaries to the outermost sphere of vibratory space. The causal universe is the womb of creation. In the causal universe, God's finest creative forces of consciousness, and highly evolved beings with their intuitive processes, objectify universes from subtle divine thought forces. ...

To attain the Creator, Krishna tells us in this passage [The Gita VIII:9-10], the yogi must completely penetrate his life force through the single or spiritual eye. (God Talks With Arjuna: The Bhagavad Gita by Paramahansa Yogananda, p.725)

"If therefore thine eye be single"

Jesus said, "If therefore thine eye be single, thy whole body shall be full of light." By taking his consciousness through the spiritual eye, he entered the reality of his fleshly body as divine light, the resurrection of flesh into the Infinite Christ and God. In deep meditation on the inner spiritual eye, one can experience this transcendence: By consciously withdrawing the life energy and consciousness from the senses and muscles and nerves, one can perceive the sublimation of the body into the rays of the spiritual eye, transforming the consciousness of flesh into the consistency of light. The light of the body is resurrected into the Cosmic Christ Light, the mind into Cosmic Consciousness, the human will into Divine Will, the mortal life into Eternal Life, the joy of the soul into the Bliss of Spirit.

The ocean is behind all individual waves. So is God behind the cells of our body, behind every thought, behind every breath and beat of the heart. He is the Light and the body is a flicker of that Light; its fibers, rays of radiant energy. That is what Jesus realized. He could resurrect his body because he knew its atoms and subatomic particles were nothing but radiations of that Great Light. (The Second Coming of Christ, p.1509)

He who closes the nine gates of the body, who cloisters the mind in the heart center, who fixes the full life force in the cerebrum— he who thus engages in the steady practice of yoga, establishing himnself in Aum, the Holy Word of Brahman, and remembering Me (Spirit) at the time of his final exit from the body, reaches the Highest Goal.
—The Bhagavad Gita VIII:12-13

A jyoti mudra technique that is taught to Kriya Yogis has for its purpose the making manifest the light (jyoti) of the spiritual eye by "closing of the nine gates of the body," which Lord Krishna here advocates as a means for man's illumination.

The advanced Kriya Yogi by this technique is able to control the life current that is ordinarily diffused throughout the body, and to withhold its usual copious flow outward through the nine gates or openings of the body. The mind (manas, or sense consciousness) is withdrawn from the three lower spinal centers associated with the physical senses, uplifted to the heart center (the second "stopping place" in the ascension to the highest spiritual centers in the brain). With the attention focused at the point between the eyebrows, the withheld life force becomes concentrated there and in the cerebrum, illumining the omniscient spiritual eye, the divine gateway to the Infinite. The yogi hears the Cosmic Sound of Aum, the Holy Word of Brahman. Merging in the Aum vibration, the yogi enters the spiritual eye and releases his soul from the three bodies (as aforementioned). Experiencing the omnipresence of Aum, he merges in Kutastha or Christ Consciousness inherent therein, and then ascends through Cosmic Consciousness to the transcendental Absolute beyond vibratory manifestation.

The yogi who steadfastly and successfully practices this method of realization attains consciously at the time of death complete liberation in Spirit. (Chapter VIII, God Talks With Arjuna: The Bhagavad Gita by Paramahansa Yogananda)