Kriya Yoga in The Bhagavad Gita

by Paramahansa Yogananda
Excerpts from God Talks with Arjuna: The Bhagavad Gita

Prana and Apana: Two Main Currents in the Body

This present Gita verse deals with two specific functions of life force in its differentiations as prana and apana. As there is a "tug-of-war" on the macrocosmic scale reflecting Spirit's projecting wish to create and His opposing attracting wish to bring the many back into the One, so does this same contest in duality take place on a microcosmic scale in man's body. One expression of this positive-negative duality involves the interaction between prana and apana.

There are two main currents in the body. One, the apana current flows from the point between the eyebrows to the coccyx. This downwardly flowing current distributes itself through the coccyx center to the sensory and motor nerves and keeps the consciousness of man delusively tied to the body. The apana current is restless and engrosses man in sensory experiences.

The other main current is that of prana, which flows from the coccyx to the point between the eyebrows. The nature of this life current is calm; it withdraws inwardly the devotee's attention during sleep and in the wakeful state, and in meditation unites the soul with Spirit in the Christ Center in the brain. There is thus an opposite pull exercised by the downwardly flowing current (apana) and the upwardly flowing current (prana). Human consciousness is pulled downward or upward by the tug-of-war between these two currents to bind or release the soul.

The vital current flowing outward from the brain and spine to the cells, tissues, and nerves becomes attached to and clogged up in matter. It is used up, like electricity, through bodily motor movements (voluntary and involuntary) and mental activity. As the life in the cells, tissues, and nerves begins to be exhausted by this motor and sense-perceptive activity—especially through excessive, inharmonious, non-equilibrated actions—prana works to recharge them and keep them vitalized. In the process of consuming life energy, however, they give off waste products, "decay." One such product is carbon dioxide excreted by the cells into the blood stream; the immediate purifying action of prana becomes necessary to remove the accumulation of this "decay" or death would soon occur. The physiology of this exchange is breath.

Breath — Cord that Ties Soul to the Body

From the opposite pulls of the prana and apana currents in the spine, the inhalations and exhalations of breath are born. When the prana current goes upward, it pulls the vital breath laden with oxygen into the lungs. There prana quickly distills a quantity of necessary life force from the electronic and lifetronic composition of the oxygen atoms. (It takes a longer time for prana to distill life force from the grosser liquid and solid foods present in the stomach.) That refined energy is sent by the prana current to all bodily cells. Without such replenishment of pure life force, the cells would be powerless to carry on their many physiological functions; they would die. 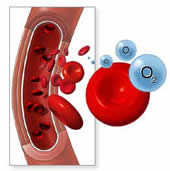 The life energy distilled from the oxygen also helps to reinforce the life-force centers in the spine and at the point between the eyebrows, and the main reservoir of life energy in the cerebrum. The surplus oxygen from the inhaled breath is carried by the blood throughout the body, where it is utilized by the five vital pranas in various physiological processes.

As noted, bodily activity produces decay and the consequent waste product of carbon dioxide. This waste is excreted from the cells by the apana, or eliminating, current, and is carried by the blood to the lungs. Then the downwardly flowing apana current in the spine causes exhalation and pushes out the impurities of the lungs through the exhaling breath.

Respiration, activated by the dual currents of prana and apana, is accomplished physiologically through a series of complex nervous reflexes—chemical and mechanical—involving primarily the medulla oblongata and the sympathetic, or involuntary, nervous system. The intricate sympathetic system, in turn, is empowered by the prana and apana currents working through the vital branches of astral life currents that correspond to the physical sympathetic nervous system—the main branches of which are called ida and pingala. To study the physiology of breath without an appreciable understanding of the subtle life principles behind it is like studying Shakespeare's Hamlet while leaving out the parts portrayed by the character Hamlet.

Inspiration and expiration go on largely involuntarily throughout one's life. So long as the life current (prana) pulls the inhaling breath into the lungs, man lives; whenever the downwardly flowing current (apana) in the exhalation becomes more powerful, man dies. The apana current then pulls the astral body out of the physical body. When the final breath leaves the body through the action of the outgoing current, apana, the astral body follows it to an astral world.

It is thus said that the human breath knots the soul to the body. It is the process of exhalation and inhalation resulting from the two opposite spinal currents that gives man perception of the external world. The dual breath is the storm that creates form-waves (sensations) in the lake of the mind. These sensations also produce body consciousness and duality and thus obliterate the unified soul consciousness.

The Mystery of the Breath

God dreamed the soul and encased it in a dream body heaving with dream breath. The mystery of the breath holds the solution to the secret of human existence. There is even a direct connection between respiration and physical longevity. The dog, for instance, breathes fast and has a short life. The crocodile breathes very slowly and may live to over one hundred years. Stout persons breathe heavily and die prematurely. When through disease, old age, or any other physical cause the dream breath vanishes, the death of the dream body follows. Yogis therefore reasoned that if the body did not decay and toxins did not collect in the cells, breathing would not be required; that scientific mastery of breath by preventing decay in the body would make the flow of breath unnecessary and provide control over life and death. From this intuitive perception of the ancient rishis came the science and art of prana-yama, life-control.

Pranayama is suggested by the Bhagavad Gita as a universally suitable method for man to use to release his soul from the bondage of breath.

Kriya Yoga:
Controlling the Current of Prana and Apana

"The yogi is greater than body-disciplining ascetics, greater even than the followers of the path of wisdom or of the path of action; be thou a yogi!" (VI:46).

That it is Kriya Yoga pranayama that is referred to is evidenced not only in this verse IV:29, but also in V:27-28:

"That meditation expert (muni) becomes eternally free who, seeking the Supreme Goal, is able to withdraw from external phenomena by fixing his gaze within the midspot of the eyebrows and by neutralizing the even currents of prana and apana [that flow] within the nostrils and lungs..."

"Liberation can be attained by that pranayama which is accomplished by disjoining the course of inspiration and expiration." (Yoga Sutras II:49.)

Breath, lungs, heart slow down in sleep but are not completely stilled. But by Kriya Yoga the breath is gradually quieted and the movements in the lungs and the body stilled. When motion leaves the entire body, owing to lack of agitation and to complete physical and mental stillness, venous blood ceases to accumulate. Venous blood is ordinarily pumped by the heart into the lungs for purification. Freed from this constant work of blood purification, the heart and the lungs are quieted. Breath ceases to go in and out of the lungs by the mechanical action of the diaphragm.

Kriya Yoga pranayama stops the bodily decay associated with apana, manifest in the exhaling breath, by fresh oblations of life force or prana, distilled from the inhaling breath. This practice enables the devotee to dispel the illusion of growth and decay of the body as flesh; he then realizes it as made of lifetrons.

The body of the Kriya Yogi is recharged with extra energy distilled from breath and reinforced by the tremendous dynamo of energy generated in the spine; the decay of bodily tissues decreases. This lessens and ultimately makes unnecessary the blood-cleansing function of the heart. When the pulsating life of the heart pump becomes quiet, owing to nonpumping of venous blood, exhalation and inhalation are no longer needed. The life force, which was dissipated in cellular, nervous, respiratory, and heart action, withdraws from the external senses and organs and unites with the current in the spine. The Kriya Yogi then learns how to commingle the upwardly flowing life current (prana) into the downwardly flowing current (apana) and commingle the downwardly flowing current (apana) into the upwardly flowing current (prana). He thus neutralizes the dual movement, and by will power withdraws both currents into one revealing sphere of spiritual light at the point between the eyebrows. This light of pure life energy scintillates from the cerebrospinal centers directly to all the bodily cells, magnetizing them, arresting decay and growth, and making them vitally self-sustained, independent of breath or any external source of life.

So long as this light is flowing up and down as the two battling currents of prana and apana—the breaths of inhalation and exhalation—they lend their life and light to the sensory perceptions, and to the mortal processes of growth and decay.

But when the yogi can neutralize the downward and upward pull of the spinal currents, and can withdraw all life force from the senses and sensory motor nerves,
and can keep the life force still at the point between the eyebrows, the cerebral light gives the yogi life control or power over prana (Kriya Yoga pranayama).

Life force withdrawn from the senses becomes concentrated into a steady inner light in which Spirit and Its Cosmic Light are revealed.

Kriya Yoga pranayama the scientific method of neutralization of breath, has nothing in common with the foolish practice of trying to control life current by forcible retention of breath in the lungs—an unscientific, unnatural, and harmful practice. Anyone holding the breath for a few minutes in the lungs feels pain, suffocation, and heart strain. This adverse bodily effect should be sufficient proof that yogis would not recommend such unnatural practices. Certain teachers do advise unscientific, not to say impossible, lone retention of breath in the lungs—a practice completely tabooed by God-enlightened yogis.

Yoga, the highest knowledge of mankind, is not a cult nor a dogmatic belief, but rather commends itself to the greatest scientists of the East and the West.

True kumbhaka, or the retention of the breath mentioned in enlightened yoga treatises, refers not to the forcible holding of the breath in the lungs, but to the natural breathlessness brought about by scientific pranayama, which renders breathing unnecessary.

Kriya Yoga is referred to obliquely in several scriptures and yoga treatises as Kevali Pranayama or Kevala Kumbhaka—true pranayama or life control that has transcended the need for inhalation (puraka) and exhalation (rechaka); breath is transmuted into inner life-force currents under the complete control of the mind.

["When the breath stops effortlessly, without either rechaka (exhalation) or puraka (inhalation), that is called Kevala Kumbhaka."—Hatha-Yoga Pradipika, 11:73.
"The aspirant who can perform Kevali Kumbhaka, he only is the true knower of Yoga."—Gheranda Samhita, V:95.
"One who is adept in Kevala Kumbhaka, which has no rechaka and puraka, he has nothing unattainable in the three worlds."—Siva Samhita 111:46-47.

Of the various stages of pranayama breathlessness (kumbhaka), Kevali is extolled by adept yogis as the best or highest. Though in principle it may be equated with Kriya Yoga, Kevali Pranayama is not as explicit as the specific Kriya Yoga science and technique revived and clarified for this age by Mahavatar Babaji and given to the world through Lahiri Mahasaya. (pg.499-505)